I am looking at this girl next to me. Damn, she talks much. She’s definitely the center of attention around the dinner table. She keeps talking about her job and how terrible her colleagues are. Most people just listen but some try to join in. They try to bring in their own personal examples, but as soon as that happens, she immediately takes back the word and continues on her own.

I am dying of boredom. I am not trying to join in - gave up a long time ago. I want to leave, but there are still nachos on the table, which I very much enjoy.

The girl suddenly stops talking, grabs the final nacho, and turns to me. She publicly throws in THE only question, that I dread more than spiders, death, or anonymous phone calls. It’s this question:

How dare she! She grabs the final nacho, AND she asks me this demonic question?! Worst question ever! Why are you so quiet?! It’s like sucking out all the oxygen from the room, and then knocking on other people’s heads, questioning them why they are not breathing!

Naturally, I give her an unfunny answer (”I’m tired”), and since all the nachos are gone, I leave.

Cut to a different time, one day my colleagues invite me to a board game party. I am new to this job and I want to make a good first impression. I don’t want to be the quiet guy, so I make a decision. “This time, no one will ask me why I am so quiet. I will be talkative. I will react to everyone and everything!”

The night begins, and I am fucking killing it. Joke after joke, laughter after laughter. I even crack a pedophile joke and completely get away with it. I am having a great time. I turn to the guy sitting next to me and ask if he is having a good time too.

He slowly finishes his sip from his beer, turns his head to me, and goes: “Why do you talk so much? You are annoying. This is why I hate extroverted people.”

This critique hits me hard because I have always considered myself a nice, attentive guy (because I am). And now, here I am, sucking out all the oxygen from this room?! No way! I could hear a little Obi-Wan Kenobi on my shoulder gently whispering to my ear “You Have Become the Very Thing You Swore to Destroy!” (This didn’t really happen of course. If it did, I would have raised my index finger, and calmly replied “No-no-no, I didn’t swear to anything. I don’t make commitments.”)

Stumbling upon both extremes, I did, what any normal person would do. I drew a graph. 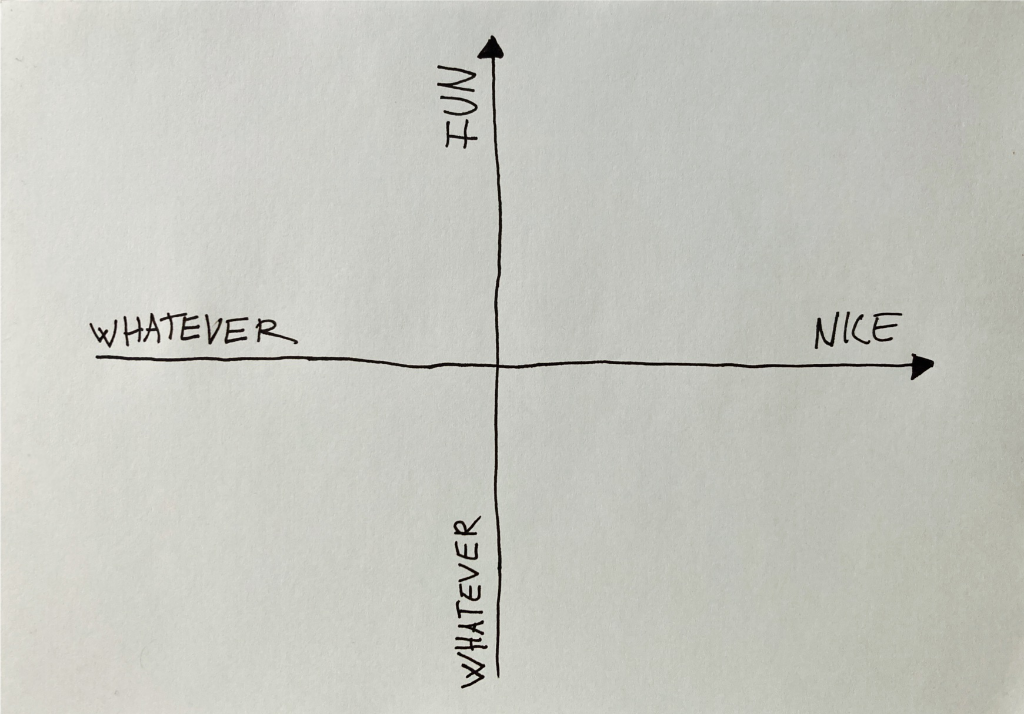 Let’s play a game. Go ahead and place your classmates, colleagues, family, and friends on this graph I call the “nice-and-funny” graph. There are no units of measure, but you can measure people to each other’s position. Remember: nobody’s watching, so try to be as honest as possible.

Being nice is about listening. It’s about giving genuine attention, asking good questions, and showing empathy. Introverts tend to be good at this; being nice, attentive, and understanding. The critique they often get, however, is that they are “boring”, “too quiet”, or “nothing special”. Nice, but not always fun → bottom right corner. 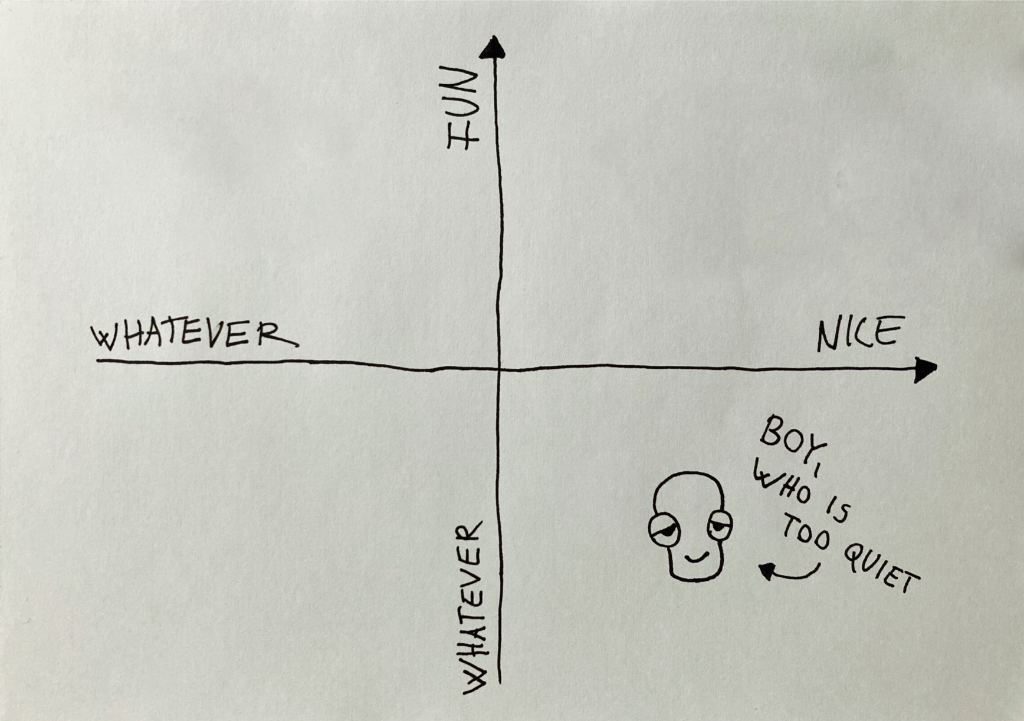 Being fun is about speaking up. It’s about receiving attention with confidence, expressing ideas, and sharing. It’s not necessarily about comedy and telling jokes (it helps though), but about active participation. Extroverts are strong on this one; they tend to be entertaining, impulsive, and creative. The critique they often get, however, is that they are “tiring”, “shallow”, or “too self-centered”. Fun, but not always nice. → upper left corner. 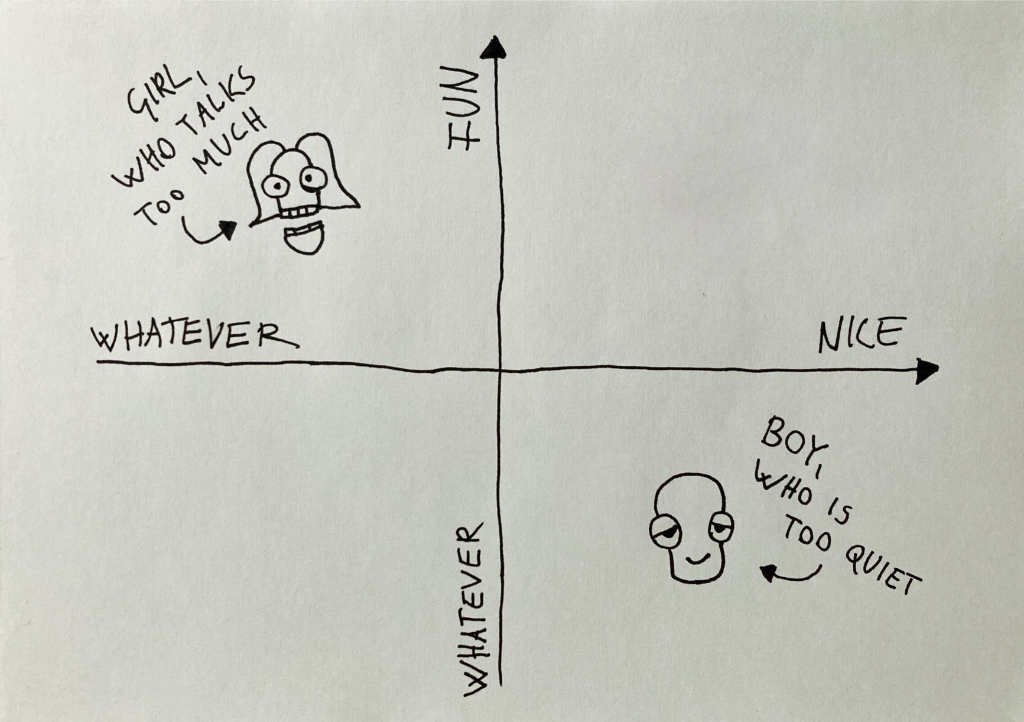 It goes without saying, that not all introverts are nice and not all extroverts are fun. Some people are just simply shit. Also, people are not either purely introverts or purely extroverts. Obviously, these things mix, but usually there is a dominant side, which forms how you co-op with social interactions. Being aware of your strengths and weaknesses can help you identify, which axis of your own nice-and-funny chart you can improve on. 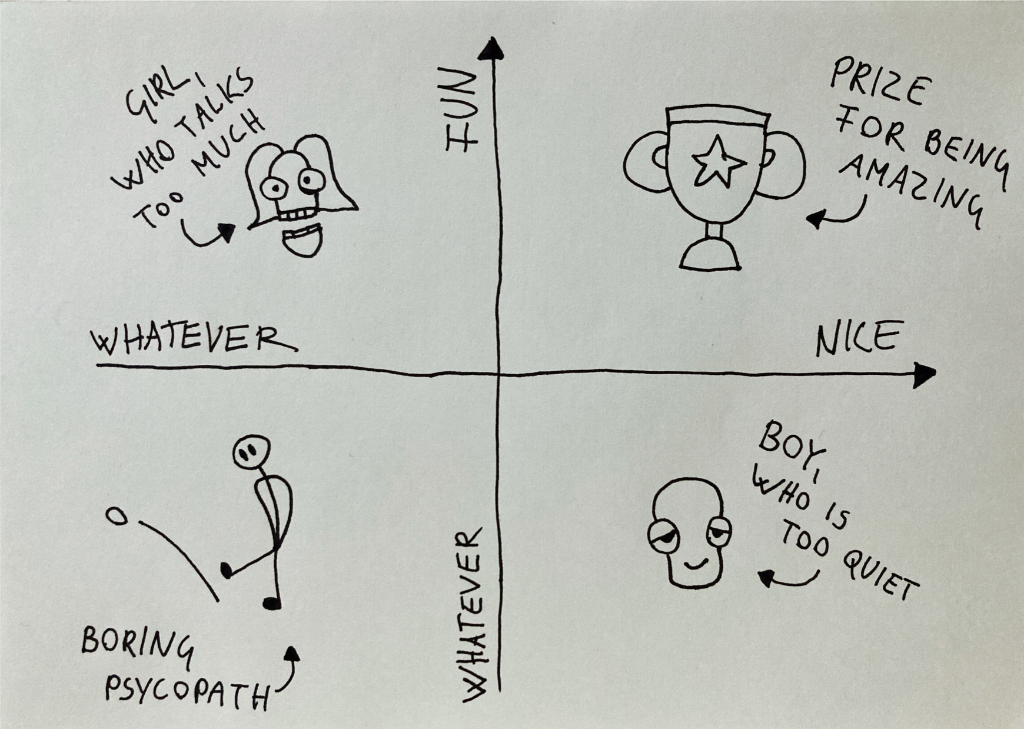 The funniest and kindest man

I think this is why Robin Williams was so popular - and still is today. Through his films, characters, and stand-up shows, we got to know Robin Williams not only as an extremely entertaining, but also as an extremely kind person - just think of Aladdin’s Genie, for example. He was the one who powerfully represented both poles and who (whether consciously or not) successfully integrated both axes into one coherent personality.

You can read my post about The Legendary Robin Williams here.

Learn about personal growth & creativity. Subscribe to my newsletter and get a free copy of my book "Writing Your First 100 Jokes".

Hi, I'm Gábor. I run a biweekly newsletter, where I share my posts and Quora answers about personal growth & creativity. Having doubts? Come, meet me.

Awesome! You have subscribed to the newsletter! Check your inbox for some treats, and don't forget to check your Spam folder too.